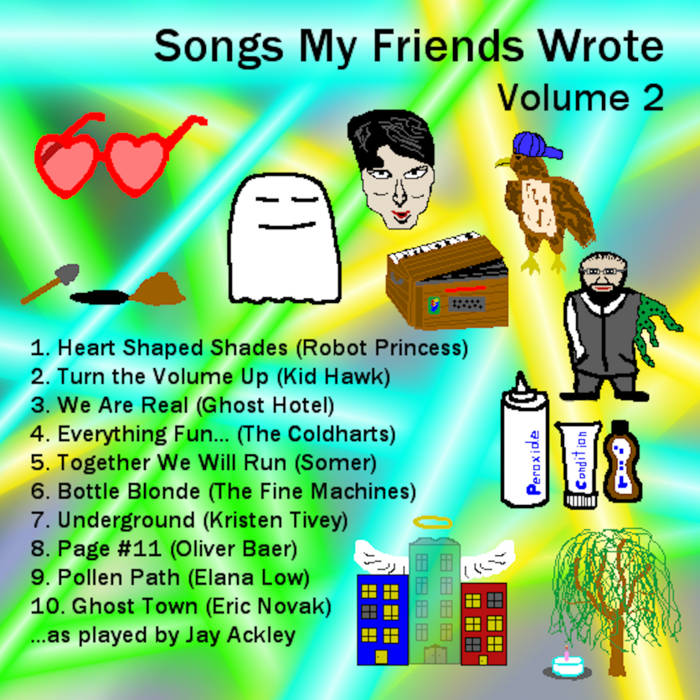 One of my favorite parts about writing and performing music is all the incredible songwriters I've gotten to meet and befriend.

I took some time during quarantine to learn some of my favorite songs of theirs, and it was really special and wonderful for me to feel this connection with other people's work in an intimate way during a season of seclusion.

And so, Songs My Friends Wrote (Volume 2) was born.

It would mean the world to me if these covers encouraged you to check out any of these songwriters' originals and other work - it's really great stuff that I feel enormously lucky to have been exposed to - here's a little bit more about each of them:

Heart Shaped Shades is a song that for me really captures the feeling of exhilaration and emotional confusion of mixed-gender adolescent friendships! It's by Robot Princess, a band fronted by Beau Alessi that I've had the pleasure of knowing since I first started playing at Sidewalk Cafe back in 2014. You can listen to the original and get the album here:  robotprincess.bandcamp.com/album/almost-always

Turn the Volume Up is a rocking single by Kid Hawk (fronted by Emily Einhorn) that is also just really exhilarating to play (I have never 'oooh oooh oooh'd on a track before) and has a lot of fun energy around mutually destructive romantic entanglements! You can check out the original here:  kidhawkmusic.bandcamp.com/track/turn-the-volume-up

We Are Real is a song off the 2012 album 'Do You Feel It?' by Ghost Hotel, erstwhile project of Sam Paxton, who has been releasing music as Boy Classic and is a member of the Hell Yeah Babies. To me this song really captures the way that close interpersonal connections are the only thing that can save us from the alienation of society! The whole original album is here:
ghosthotel.bandcamp.com/album/do-you-feel-it

Everything Fun is a Little Bit Dangerous is taken from the darkly hilarious play Edgar Allen written and produced by The Coldharts (Katie Hartman and Nick Ryan). It's the story of a couple precocious sociopaths and if you ever get the chance to see it live do not miss it! But also, the audio recording works really well as a radio play!
thecoldharts.bandcamp.com/album/edgar-allan

Together We Will Run has been a really special song for me to learn and play over the last couple months. It is about pulling together to help each other overcome adversity and dark times! Somer kicks ass in Clinical Trials and MNR PLSR and has been releasing some really great solo singles - check it out!
soundcloud.com/somerbingham/together-we-will-run

Bottle Blonde is playful tune about being captivated by a romantic co-conspirator with a shifting and unstable identity. Dan Piccoli of The Fine Machines is a true craftsman of fine songs and the album Distant Shores is one of my all-time favorites.
thefinemachines.bandcamp.com/album/distant-shores

Underground is by Kristen Tivey, who I first met as a saxophone player but was secretly (to me at least) a fantastic solo artist all along. This song is one of the relatively chipper outliers on a song full of gorgeous melancholy that sets a really distinct atmosphere. Check out Purgatory!
kristentiveymusic.bandcamp.com/album/purgatory

Page #11 was adapted from a book of poetry published by Oliver Baer - who is one of the most enthusiastically weird and tentacular people I've ever had the pleasure of knowing. By adapting one of his poems into this song I was officially inducted into the hallowed membership of the Conclave of the Baer, an affiliation I hope I never have cause to regret. Listen to some other adaptations here, if you dare:
aconclaveofbaer.bandcamp.com

Pollen Path is one of the beautiful songs that Elana Low has composed with her harmonium. An instrument and playing style that feels totally different than anything else you might hear at the open mic. It hits me in my bones. She released Loam late last year:
elanalow.bandcamp.com/album/loam

Ghost Town is an off-beat little tune by Eric Novak, who I have the pleasure of rounding out the rhythm section with in Lucky Witch & the Righteous Ghost. It's about the bizarre emotional resonance you get from seeing someone who looks like how someone you know used to look. And, you know, New York town is full of ghosts. It's uncanny and I love it.
eric-novak.bandcamp.com/track/ghost-town

Minnesotan in Brooklyn by way of London; having a sing-song through the dystopia.

Bandcamp Daily  your guide to the world of Bandcamp